Where to Buy Judaica Online – A Full Guide

Judaica is simply a general term for historical and literary items with a connection to Judaism or Jewish culture and tradition. In 2022, there’s much less emphasis on literary material in the world of popular Judaica. Most people associate modern Judaica with ritual and religious objects like menorahs, Kiddush cups, Shabbat candlesticks and tefillin sets.

What does Judaica Mean?

Judaica means works of art or craft with a Jewish theme. The word judaica is often confused with the Jewish religion or Judaism. This is mainly because a lot of judaica items are intended for ritual practice, either in a synagogue or at home during a Jewish holiday. Other religions and national cultures haven’t really produced an equivalent of judaica, which adds to the confusion.

Even many secular Jews are vague about the exact definition of Judaica and assume it’s a niche religious category. It’s a pity because modern Judaica includes some of the latest designs from contemporary Israeli artists. Judaica definitely has a strong connection to the Jewish religion and is a link to our ancient Jewish past – but that is really just the starting point.

What is Antique Judaica?

An antique is basically any old item that is valued for its age and comparative rarity, as well as for its beauty and any precious metals or gems used in its creation. Many people who want to buy Judaica confuse antique Judaica with reproduction Judaica and traditional Judaica.

What is Reproduction Judaica?

What is Traditional Judaica?

There are no hard and fast rules about exactly what constitutes traditional Judaica. A simple clay or ceramic menorah might look like minimalist modern art. In fact, it is probably closer to the lamps used by ordinary people in Biblical Israel. When you’re dealing with a religion and people that have spanned millennia and inhabited the entire world, you define ‘traditional’ at your peril!

What does Judaica mean in History?

Judaica served exactly the same purpose throughout history that it does now. The old style artisans, craftsmen and artists (and scribes) produced beautiful and functional items for religious rituals, and ornamentation. The urge to decorate household utensils, tools, and weapons is a very basic human characteristic. The earliest Jewish communities, desert nomads like Abraham and Sarah, had their own Judaica. Something as simple as a Shabbat lamp was the early equivalent of a modern silver candlestick or menorah.

The ritual items of the temples in Jerusalem were also Judaica. The Tabernacle under Moses, King Solomon’s Temple and the Second Temple continued exquisitely beautiful and expensive items of historical Judaica.  Along with the household items of kings like Solomon and David, they arguably represented the peak of luxury design. It’s only in modern times that we’ve begun to rival historical items like the Seven Branched Candlestick and Altar of Incense of the ancient hekhal.

The insular Jewish diaspora communities of the Middle East and Europe built their communal lives around the synagogue and invested time, money and effort in judaica. These were portable treasures that could be packed up and hidden or carried away if the community was threatened. Judaica styles tended to evolve under local influences. Yemenite Jewish silverwork is famed for its elaborate silver filigree, and classic Middle Eastern style. Ashkenazi Judaica took on European influences, while modern Judaica is influenced by every culture and design style.

A brief history of Jews

What is Judaica Silver?

There is no specific Judaica silver. The best modern Israeli silversmiths use 925 sterling silver to craft items of handmade Judaica. The 925 sterling silver is the perfect alloy for creating luxury items that also need to be robust and functional enough for daily use. The extra purity of fine silver makes little difference to the final appearance of an item, but does detract from its durability – and therefore its final quality.

925 silver can be polished to a gleaming shine, which is a prerequisite for a Shabbat dinner or holiday dinner. One of the reasons why silver is so popular is that it looks amazing set over a crisp white linen tablecloth. A set of silver candlesticks or a Jewish candelabra with flickering beeswax candles can make the average dining table look more like a royal banqueting table. Traditionally crafted silver also has a traditional old-world look that can make a handmade silver dreidel or etrog box feel like a priceless antique.

How is Silver Judaica Decorated? 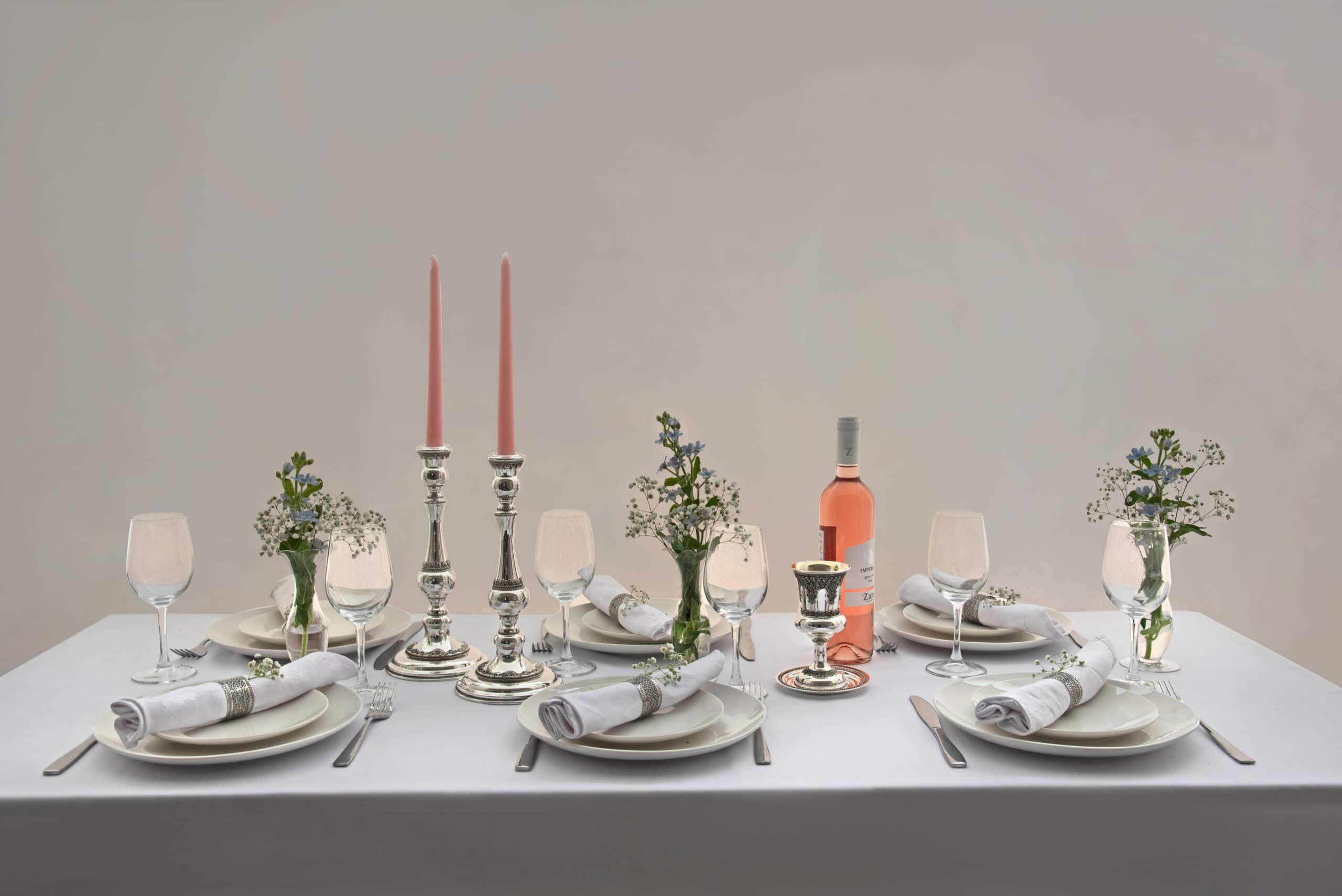 Fine silver filigree work is the mark of a master craftsman like Avi Nadav. The skill isn’t just in working the silver into intricate patterns or lifelike designs, it’s understanding the item of Judaica and its unique proportions. Jerusalem is home to some of the world’s finest Jewish Yementite craftsmen who are third or fourth generation master silversmiths.

To see our full category of Filigree Decorations Products

Silver stamping is a precise and delicate process that permanently stamps designs into the surface of the silver. Expert artisans use a hammer and dies to stamp letters, geometric patterns, letters, Jewish emblems and motifs, or natural designs like flowers and leaves into the silver. Silver stamping Judaica requires absolutely steady hands, patience and concentration. It is a true art.

People often confuse silver stamping with hammered silver. Hammered silver is a decorative effect where a series of repeated hammer blows precisely dent the surface of the silver until it has an almost scaled effect. The hammered silver looks older and can be said to glitter, rather than gleam in the light.

Silver solder is almost the reverse of stamping, instead of pressing a design into the surface of the silver, the artist permanently solders another smaller piece onto the main item. A master silversmith can take a basic item of Judaica and solder raised letters, Stars of David, or other decorations flawlessly into place. The finest craftsmen can solder tiny silver leaves and branches to an item until it appears to be real foliage.

Enamel colors is often combined with sterling silver items. The channels of the silver can be filled with colorful liquid enamel that hardens to a rock solid finish. A popular choice is bright shades blue enamel. The gleaming 925 sterling silver and blue enamel combine to resemble the blue and white of Judaism.  colod Enamel colors can be used to highlight names, traditional designs, or to add a splash of bright colors to any item of Judaica.

Gold plating isn’t just decorative. It’s an old technique for proofing the inside of cups and drinking vessels. Gold is a ‘neutral’ metal that will never affect the taste of wine or fine liqueur. A silver Kiddush cup or liquor set doesn’t just look beautiful when the inside is gold plated, it is superb to drink from. Netilat Yadayim sets can also be gold plated on the inside of the vessel. Even the finest silver can tarnish with daily use, and will require polishing. Gold never loses its shine.

Where to Buy Judaica Art?

If you want to buy Judaica art, and you aren’t in Israel, we recommend buying Judaica online from ICOJ. It’s the fastest and most convenient way to get high quality handmade Judaica that is made by Israeli artists and artisans. A lot of the Judaica on sale in tourist shops – and even boutiques, galleries and museum shops – is made in Turkey. A lot of online stores also sell Turkish made Judaica. They look good on a webpage, but aren’t crafted with the same love and passion as handmade Israeli Judaica – how could they be?

You’ll realize the difference in quality, design and finish when you compare foreign made Judaica to an item made in a Jerusalem workshop by a fourth generation Jewish silversmith. Every item on sale in the ICOJ is handmade in Israel and is a work of art that began with the artist’s personal vision.

Read Part Two of this blog post to learn more about contemporary Judaica, modern designs and styles, and the exciting and unusual materials that are used to create them.

Hello, my name is Benny Abraham and I am the Founder of The Israeli Center of Judaica. I created this boutique marketplace website out of love and a strong desire to help small and medium-sized Israeli artists who don't have much exposure and who mainly want to focus on their art creation.

We offer unique art and Judaica made with passion and love to bring the beauty of Israeli and Jewish art to your homes. We focus on producing various unique products and use and combine materials and designs not seen elsewhere.

In the past, I worked as a silversmith specializing in sterling silver judaica. After many years working as a silversmith, I decided to follow my dream of opening a marketplace for all things Israeli Judaica and founded the Israeli Center of Judaica.